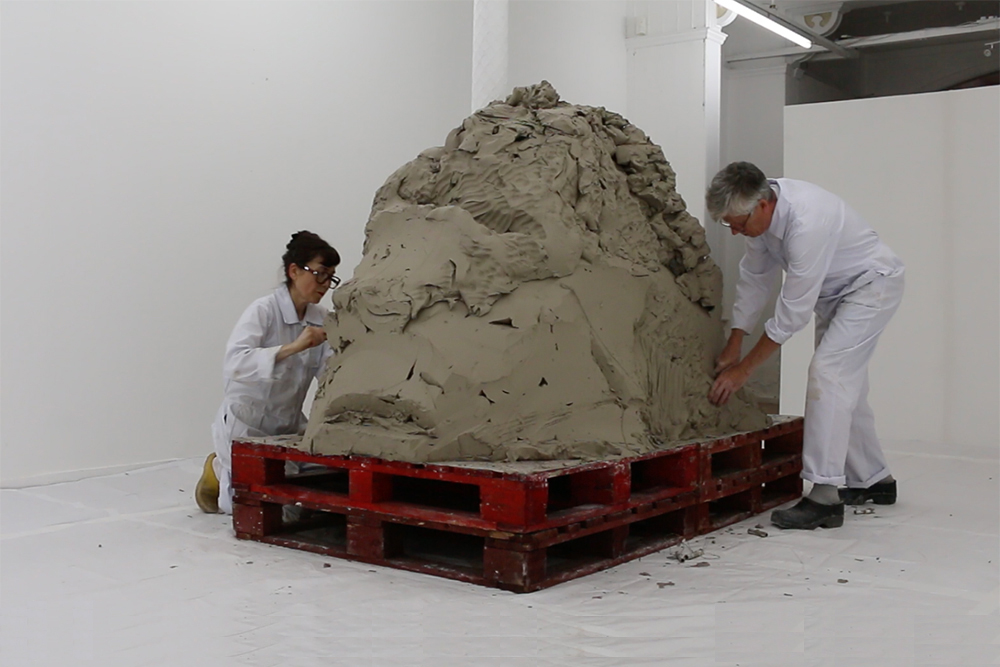 Terms & Conditions was a new work made for the AirSpace gallery in Stoke-on-Trent as part of the British Ceramics Biennial 2019.
Following various research visits and workshops in Stoke, Dunhill and O’Brien recruited a team of volunteer participants from the area to work with them during a 3 week residency.

Each member of the group, including a dentist, dressmaker, boulderer, sports masseur, translator, jeweller, baker and engineer, agreed to step outside of their individual comfort zones to explore a range of ‘terms and conditions’ for collaborative making, using raw clay, and methods that tested the limits of verbal and visual communication. Working within a purpose built modular ‘dexion’ structure, they each employed their unique 3D problem solving skills developed through their occupations and hobbies.

The exhibition that followed the residency was comprised of a number of elements:  a large custom made structure forming the workshop/laboratory space; unfired raw clay objects made by the team of participants; video documentation of the processes involved; a wall text, and a 3.5 tonne raw clay form sculpted by Dunhill and O’Brien, and based upon information gathered during the workshops.

Sitting in and among these elements were a number of found rocks as well as images and videos of rocks. These were used as source material and prompts for the various activities, and connect this new work to Dunhill and O’Brien’s long standing fascination with naturally formed rocks and stones, both as they are represented in popular culture, and as material, physical objects.

Proposition 1 (Window)
Collection of clay objects made collaboratively by participants, kept damp through a sprinkler system, and added to following workshop sessions held during the exhibition.

Proposition 2 (Sitting)
Making spaces for up to 4 seated participants. The central unit designed for two people to model the same clay object together (filmed from above); the two units on either side are for individual making (filmed from the side). Small LED screens show images used as source material. The proposition is to understand and translate the 2 dimensional images into 3 dimensional forms, solely employing tactile interpretation.

Proposition 3 (Standing)
Making space for two participants standing side by side, with a shared tabletop unit (filmed from the front). There are two options with this proposition. In the first, a participant describes how to make a rock they are exploring through touch for up to 20 minutes, while the other uses tactile interpretation to model it in clay. In the second version a participant, at an adjoining workspace, observes and gives instructions to two participants at the standing unit, who model versions of the same object in tandem for approximately 20 minutes.

Proposition 4 (Table)
Making space for up to 5 participants employed for an introductory exercise. This session is not filmed though the outcomes are kept and displayed. In the centre of a large table area a small rock (flint) rotates very slowly on a turntable. Each participant models a clay form based on the flint for 5 minutes before swapping places to work on their neighbor’s clay model for 5 minutes. This exchange continues until each member of the group has been involved in modelling every one of the clay objects. Adjoining the table is a sink as well as a storage area for the aprons and tools used by the participants.

Proposition 5 (Shelf)
Collection of collaborative clay objects made from Proposition 4 (Table). This collection will be added to during the exhibition following further workshop sessions. Stored on the shelf are also various rocks that have been employed in Proposition 3 (Standing).

Proposition 7 (How to Make a Rock – Object)
3 tonne clay sculpture made over an 8-hour period by Dunhill and O’Brien, employing sound recordings from Proposition 3 (Standing) where different participants describe how to make a rock in clay.


Proposition 8 (How to Make a Rock – Text)
A number of texts transcribing the recorded descriptions made by a number of participants during Proposition 3 (Standing).

With very special thanks to our participants: Ayad Al-Ani, Melissa Beardmore, Silvia Cotelea–Cazacu, Joanna Dawidowska, Sarah Delvari Zadeh, Steve James, Taraneh Noroozi Farsangi, Shelia Podmore, Anna Robinson, Leo Robinson, Len Robinson, John Shapter, Emma Tunnell, Asal Vahedi, and to Sophie Ashcroft, Sandy Auden, Lynn Davis, Genesis Rowley and Claire Stewart for input during preliminary workshop tests. We would also like to thank Gavin Birkin and Pete Smith for pitching in to help shift a tonnage of clay and to John Plowman and Glen Stoker for their practical and professional help and their generous encouragement and insight throughout the development and realization of the project.

This project was supported by the Arts Council England and Valentine Clays Limited, with professional support from Beacon Projects and AirSpace Gallery.