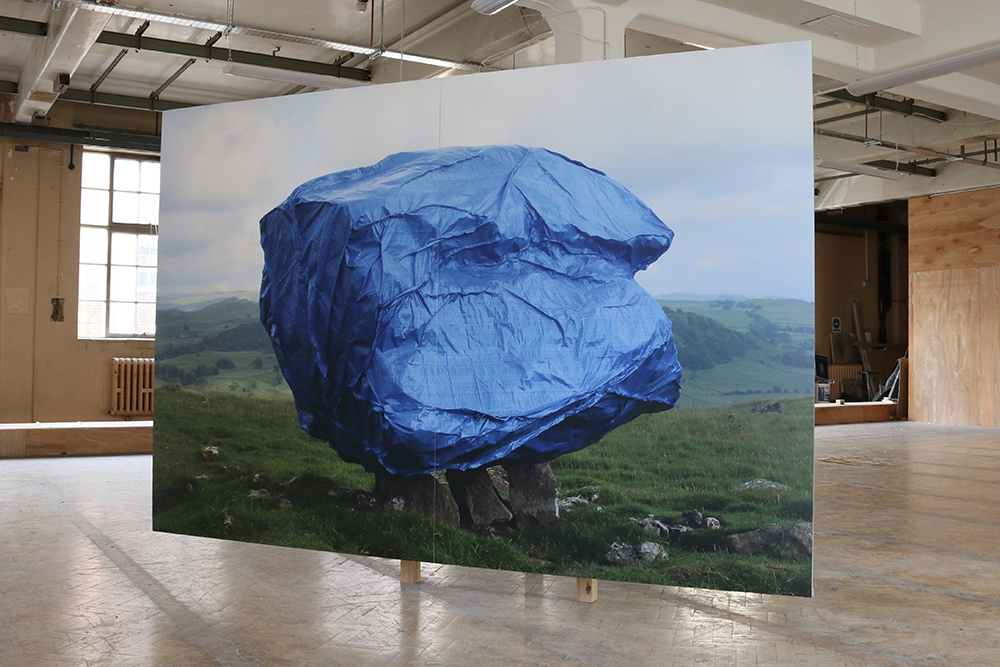 Despite its hidden armature and padding, the tailored tarpaulin, constructed to mimic the form of a rock, doesn’t quite live up to the glamour of the image that it literally projects of itself.

The pairing of stone and tarpaulin, digital photograph and ungainly fabric form, internal structure and surface effect, appears to mirror something of the awkwardness of partnering inherent in collaboration. Does one element undermine or enhance the other, can two distinctly different parts become a cohesive and convincing sculpture?

Dunhill and O’Brien  first came across a small image showing an example of an erratic boulder, at the Natural History Museum in London. Struck by its position elevated on three supporting ‘plinths’ of rock they decided to visit this naturally formed sculpture, one of the ‘Norber Erratics’, near Austwick, North Yorkshire, for themselves.

The geological term erratic refers to a boulder that has been transported from its place of origin by the movement of a glacier and deposited at a different location, in some cases thousands of miles from its geological source.

Their decision to cover the boulder with blue tarpaulins, purchased in a local store (along with some staplers) after a day measuring and filming the boulder in situ, was something of an afterthought. Wanting more information about the rock to take home, making an accurate ‘skin’ of the boulder was appealing. Not so much an homage to Christo and Jeanne Claude, but  rather a way of temporarily gathering information. In the rolling hills of Ribblesvale this migrant boulder appeared wrapped and ready for further transportation.