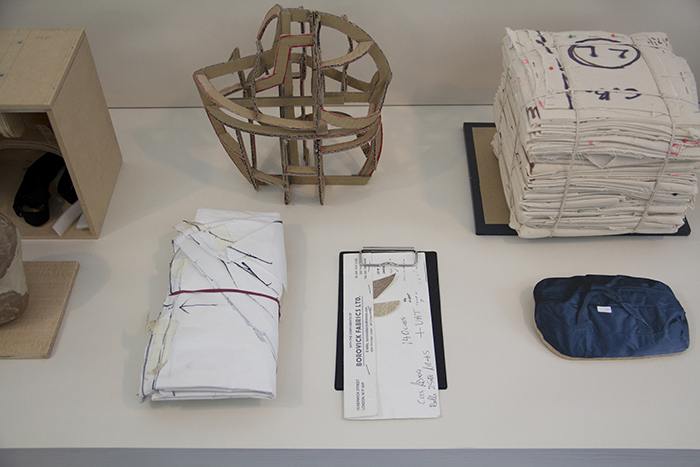 Drawing in its widest sense is central to our practice. We use it as a way of instigating, egging on, planning, researching, measuring, disrupting, packing, administrating, transporting, problematising, de-problematising, installing and de-installing our work. In our attempts to collaborate drawing is employed to communicate ideas and test propositions. Sketches, diagrams, notes, manipulated photographs and objects of various kinds are shuttled back and forth between us as part of our ongoing negotiations. We tend to work together on three-dimensional drawings (models and studio ‘mock-ups’) in order to test things out and identify pitfalls. Drawing for us then, is usually a messy byproduct of our thinking and making process, an easily overlooked record of disagreements, U-turns, practical solutions and instructions.

Rock – Drawing, 2011 comprises a number of elements (2 dimensional, 3 dimensional and time based) produced at different stages in the process of making Rock, a work completed in 2009. Collectively these drawings form a narrative about Rock, while referring to a narrative about a sculpture by Isamu Noguchi.

When we came across the American/Japanese artist/designer’s largest and heaviest sculpture, Thunder Rock in March 2009, we were intrigued and concerned by its physical awkwardness and nomadic existence. Noguchi carved this seven-foot high, 15-tonne, granite boulder, quarried in Mure on the Japanese island of Shikoku, in 1981 in response to a commission for a plaza in Philadelphia. Its US based commissioner was unable to complete the purchase and it was returned to Japan, eventually travelling 3 times across the pacific in search of a viable home. It is currently in storage with no plans for a permanent location.

Sculpture is usually clearly in and of the world but often presented as having a different kind of presence. We have been pre-occupied by this particular paradox for some time; it is something that we find both poignant and troubling and Thunder Rock struck us as a vivid example of this. Noguchi’s stated intention was to reveal something elemental in the rock that might transcend the banalities of everyday life and commerce, however the logistics of repeatedly crating, shipping and storing the work, with its expanding carbon footprint and related paper trail also locates it as a weighty piece of commercial freight.

Our full size transcription of this sculpture, based upon memory, photographic documentation and written descriptions from the Internet, was less physically challenging. Tailored in ‘distressed’ beige and cream leatherette to match the carved and un-carved surfaces of the granite, our Rock proved to be the correct size and weight when folded to be stowed as cabin luggage. Like an out sized Pakamac or sports holdall it travelled with us Economy Class to Tokyo before our trip to visit the quarry in Mure. Back in Tokyo and fully upholstered we cautiously wheeled this ungainly object through the back streets of Nishi Ogikubo to its temporary location in a picturesque spot overlooking the lake in Zempukuji Park. This convoluted journey, avoiding the steep hill between the studio and park was itself a physical drawing, ‘performed’ on a quiet Thursday in early November.