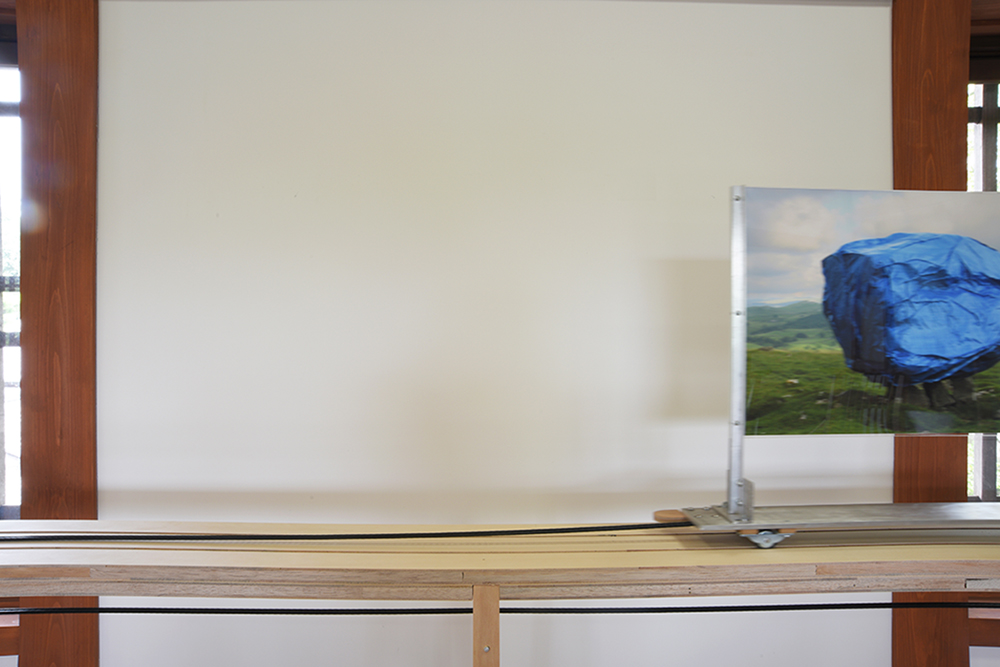 The geological term erratic refers to a boulder that has been transported from its place of origin by the movement of a glacier and deposited at a different location, possibly many miles from its origin.

We first came across an image of a particular erratic boulder, at the Natural History Museum in London and were struck by its curious position elevated on three small supporting rocks. We set off to find it in Yorkshire and there, in an area with many rocks seemingly thrown about at random, was this rock on its limestone plinths.

Tailoring blue tarpaulin*, purchased from a local hardware store, to clothe the erratic, we were able to take temporary possession of it – but this was not a homespun homage to Christo and Jeanne Claude. In the rolling green Yorkshire landscape it appeared wrapped for transportation, ready to be relocated in some way. This was indeed the start of it’s journey, albeit through a digital image, to the famous Ritsurin garden in Takamatsu, Japan’s largest and most celebrated ‘daimyo strolling garden’.

Two works were made for the exhibition at the Sanuki Folk Craft Museum. Erratic, ran the length of one wall in a gallery dedicated to a local furniture designer. An image of the boulder moved at glacial speed along a narrow track- calculated to travel the actual distance that the original erratic had been transported over the 6 weeks of the exhibition. The size of the image was meanwhile in proportion to the length of the track at a ratio of 11:1.

*Blue tarpaulin is widely used internationally for protecting objects from the weather, its colour signifying the weight and strength of the material. In the Takamatsu area there were numerous applications of this ubiquitous material and a great variety of sculptural forms created by it – at least 78 were worthy of documentation.

This project was funded by Tokyo University of the Arts, with special thanks to Professor O JUN, Associate Professor Yusuke Nishimura, Yoshinori Takakura, Kenta Kawagoe