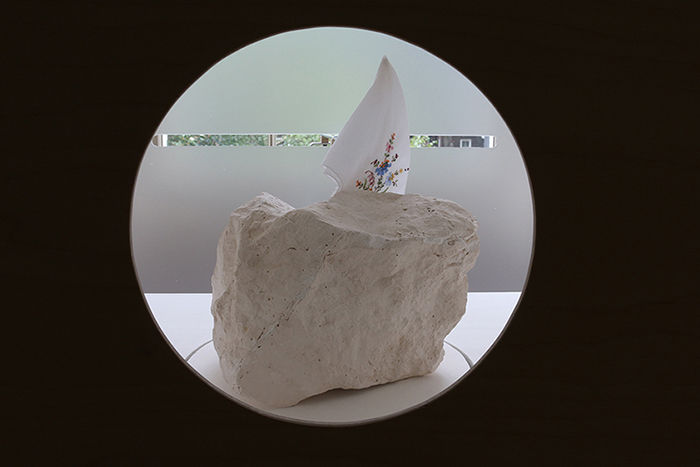 This work takes its title from a tai chi sequence that involves many subtle shifts of weight. At a certain moment one hand lightly brushes over the other before both hands draw back to push an invisible assailant.

A number of plausible narratives coexist in this work, depending on whether you speak to Dunhill or O’Brien. Even then their mood and the time of day may determine different responses. Their frequent attempts to master grasping the sparrow’s tail; or casting rocks over 20 years ago; or finding unused handkerchiefs in a carved wooden box; or remembering a poignant sequence in a Taviani Brothers Film (Kaos); or lamenting the absurdity of Brexit; or the Japanese Art of Stone Appreciation – they are asking this modest work to make room for rather alot. Their real and persistent preoccupation and dilemma – how to make sculpture together – has resulted in a work where making has become the lightest of interactions. 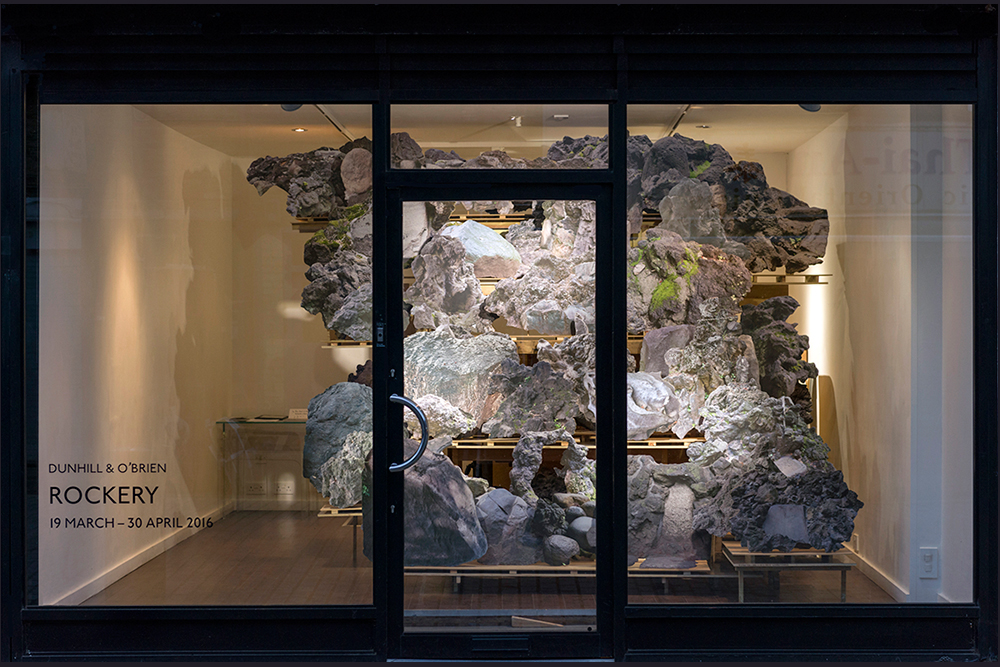 Rockery filled the upstairs gallery at White Conduit Projects with an assembly of ‘rocks’. Echoing the thriving market stalls around the corner from the gallery with shelves and structures for display. The work appears to be in tune with its immediate surroundings while its origins are clearly more distant.

During residencies in Japan, Dunhill and O’Brien have been intrigued by two particular cultural phenomena – Suiseki*, often referred to as the ‘Art of Stone Appreciation’, and Fujizuka**,surrogates of Mt Fuji constructed by groups of Fuji devotees during the Edo period. Both Suiseki and Fujizuka involve the re-presenting of forms of nature, bringing the wild and chaotic, massive and uncontrollable into a manageable, human size. Made or selected with great seriousness and purpose they also reveal something of the perversity and scale of human endeavour. The compulsion behind these cultural forms resonates with Dunhill and O’Brien’s motivation to make sculpture that seeks meaning in the awkward, unlikely and ungainly.

This exhibition responds to a month long expedition seeking out existing Fujizuka in the Tokyo region alongside regular visits to measure rocks, stones and boulders in the UK (identified through the artists developing collection of postcards of ‘celebrity’ rocks sourced from ebay).

* Suiseki (an abbreviation of the term sansui keiseki, which translates as “landscape view stone”) involves the selection and display of found stones, usually chosen for their resemblance to landscape forms, particularly mountains. Collected and presented on tailor made stands or trays, they are a somewhat oblique form of memento mori. Suiseki are highly prized and treated as objects to be contemplated and revered having a tradition that dates back to the Nanbokucho era (1336 to 1392).

** Fujizuka – In the Edo period (1603 to 1868) over a thousand Fujizuka ranging from 5 – 30 metres high were constructed in and around Tokyo from tonnes of lava rocks collected and transported from the sacred mountain. At that time when women and the infirm were not permitted or able to climb the volcano, these ‘land art’ constructions were built for the local community, to simulate the experience of climbing the final and most sacred stage of Mt Fuji, often serving as a platform to view Mt Fuji. Some of these Fujizuka remain more or less in tact hidden in between high-rise apartments in the centre of the city or in unlikely suburban areas.

This exhibition was made possible due to the generous support of Youkobo Art Space and The Japanese Agency for Cultural Affairs.

In November 2006 Dunhill and O’Brien spent 3 days contemplating and examining a hole at an archaeological site of a Cistercian Abbey in Tuscania, Italy. The hole, originally excavated by itinerant bell founders in the 11th Century, was a special pit made to cast the Abbey’s bell. Later employed as a burial site for the monks due to its location within the Abbey’s walls its scale and form had remained largely intact and indicated

Situated in a remote agricultural area the Abbey’s bell would have principally been used to mark the monks’ daily routines. It would also have exerted the Church’s authority (as the principle keeper of time) over a the local area.

The work that Dunhill and O’Brien exhibited in 2008 as part of the exhibition Just World Order, comprised of 3 parts, Object – a tailor made lining formed directly in the bell pit; Walk – a guidebook of a trek that set out to mark the distance the sound of the 40cm diameter medieval bell would have travelled with the gallery as the nominated location of the bell tower; and Phone – a mobile phone with a ringtone of a medieval bell of the same size, weight and shape, recorded at the Whitechapel Bell Foundry, that rang intermittently throughout the exhibition.

Artwork made with Mark Dunhill commissioned and curated by Peter Bonnell for Artsway Gallery.

This 3-part work involved a large hanging form, digitised ring tone of a medieval bell and an illustrated booklet describing a guided walk. The work evolved in response to an 11th century bell casting pit that had been excavated at a Cistercian Abbey in Italy and built upon our collaborative research through art practice into materiality, immateriality, scale, performative-making and collaboration.

Drawing on previous works involving cast holes, our research entailed making a tailored cast of the internal form of the bell pit. Our subsequent investigation into bell casting, including Theophilus Presbyter’s treatise on ‘Diverse Arts’ and the Whitechapel bell foundry established a reference to the bell’s function in both marking the monk’s daily routines and exerting Christianity’s authority over the geographical area surrounding the Abbey.

Walk, the artists’ booklet/ guidebook, reflected the style of local walking guides and was based on the likely perimeter of the bell’s sound transposed on the local terrain of the gallery. The mobile phone ring tone, of a bell of the same size, weight and shape, rang out intermittently, imposing itself upon the exhibition and establishing its own form of measurement and control.

The work questioned the territorial impact of the original hole and employed a range of methods to physically examine this. It drew upon our previous research (Sculptomatic 2005) that interrogated holes in sculpture and questions posed by R Casati and A.C. Varzi in ‘Holes and Other Superficialities’ and David and Stephanie Lewis in their essay ‘Holes’ considering the ontology, logic and epistemology of holes.

Exhibition catalogue with essay by Peter Bonnell and documentation of artwork ISBN: 978-0-9558406-2-3